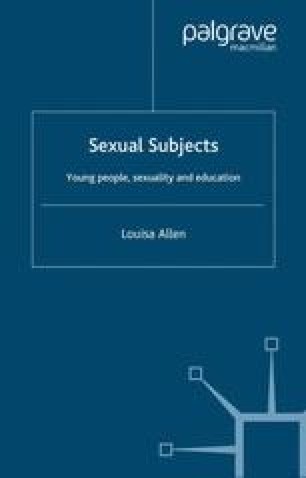 To view young people as sexual subjects who might legitimately seek sexual pleasure and express sexual desire is controversial. Such contention stems from the fact that this idea conflicts with notions of ‘good’ youth as sexually innocent. Young people know only too well the negative consequences which threaten if they are identified as sexually active by adult others. These can range from unwelcome warnings about the dangers of sexual activity to closer surveillance and regulation of their activities. Within schooling contexts the pairing of ‘student’ and ‘sexually active’ often translates as a ‘taken-for-granted signifier of resistance to education’ and an indicator that a student will not succeed academically (Nash, 2001). For young women there are particular ramifications when ‘femininity’ and ‘sexually active’ are linked. Tolman (2002) explores these in her work around young women’s experiences of sexual desire where being seen as sexually active makes it difficult to develop an identity as a ‘“good”, acceptable, moral and normal woman’ (p. 44). Such constructions of youthful sexuality vilify and pathologise young people invoking them as ‘problems’ to be solved (Aggleton and Campbell, 2000, p. 286).

Focus Group Young People Young Woman Sexual Desire Sexual Identity
These keywords were added by machine and not by the authors. This process is experimental and the keywords may be updated as the learning algorithm improves.
This is a preview of subscription content, log in to check access.