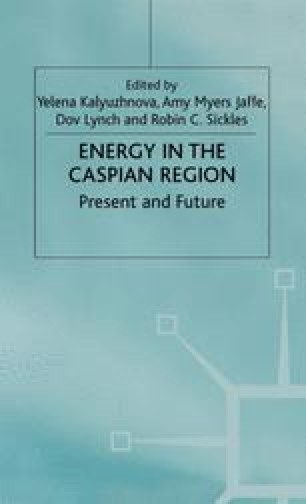 In the conclusion to his chapter on US national interests in this volume, Joe Barnes notes: “Money, influence and passion: the combination is not one to lead to sobriety of analysis or modesty of ambition.” Indeed, since the collapse of the Soviet Union, discussions of energy in the Caspian region have been prone to both oversimplification and over-ambition, mixed in with a heavy dose of potential wealth and geopolitical competition. A region that had previously been closed to the world, and even surrounding regional influences, was suddenly opened wide for foreign involvement, investment as well as scholarly analysis. The magnet attracting the surge of foreign interest has been the existence of large reserves of oil and gas in the Caspian region. Without these reserves, the new states of this area might have pursued very different paths, and international perspectives on the importance of the region would have been very different. Energy is a primary reason for many of the distortions of understanding that have arisen about the new states of the Caspian region. Energy reserves have skewed expectations in the new states themselves, and also increased the propensity for international misunderstanding about the nature of the region.

Energy Reserve Caspian Region British Petroleum Exchange Rate Appreciation Scholarly Analysis
These keywords were added by machine and not by the authors. This process is experimental and the keywords may be updated as the learning algorithm improves.
This is a preview of subscription content, log in to check access.