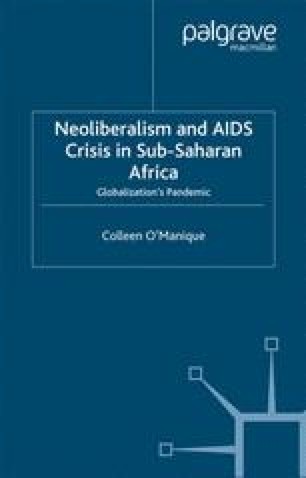 The Other ‘War on Drugs’

Perhaps no single issue has come to define the political activism of the global HIV/AIDS pandemic more than the issue of the glaring global inequality in access to life-saving treatment. As Laurie Garrett put it, ‘HIV was, by the close of 1999, a lightning rod for protest against pharmaceutical companies, trade related intellectual property rights (TRIPS), and global inequalities in public health’.1 The establishment of the WTO and its expansion of international trade law into the sphere of pharmaceutical research and development as codified in TRIPS has prompted international outrage, and intense public debate and protest. A global movement has evolved to secure access to AIDS drugs, led by MSF, Oxfam, Consumer Project on Technology (CPT), Treatment Action Group (TAG), Health Global Access Project (GAP), and Health Action International. At the same time, national coalitions have emerged in SSA, such as South Africa’s Treatment Action campaign (TAC), the Kenya Coalition for Access to Essential Medicines, and the Uganda Coalition for Access to Essential Medicines. The movement has exposed the failure of current international trade law and the global market system for getting treatment to those who need it most; but pressure has also been directed towards governments for not providing life-saving drugs, particularly in the face of the recent price breaks negotiated between various countries and pharmaceutical suppliers. Access to HIV treatment has emerged as the ‘vanguard struggle’ to the extent that political mobilization of the global HIV/AIDS movement has focused first and foremost on the right to treatment.

Essential Medicine Essential Drug Compulsory License Trips Agreement South African Government
These keywords were added by machine and not by the authors. This process is experimental and the keywords may be updated as the learning algorithm improves.
This is a preview of subscription content, log in to check access.