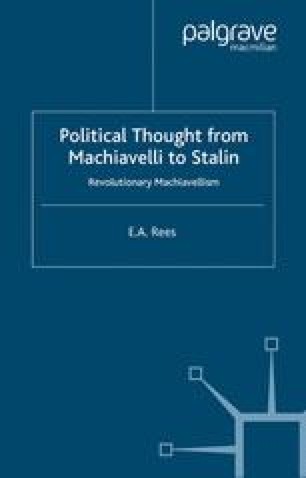 Political Thought from Machiavelli to Stalin pp 66-92 | Cite as

The radical tradition in Russian politics in the nineteenth century might crudely be divided into two strands. First, there was the strand of radical transformation, which sought change by the mobilization of political and social pressures, through propaganda and the educating of public opinion, and which sought to exploit all possibilities for evolutionary change. This was the strand represented by Alexander Herzen, Nikolai Chernyshevskii, Peter Lavrov and Georgi Plekhanov. The second strand represented what might be termed the direct action approach, which was fired by a commitment to revolutionary change, which saw revolution as essential and inevitable, and which believed that revolution would, of necessity, be violent, who saw any other approach as conciliatory and doomed to failure. This was the current represented by N. A. Speshnev, N. P. Ogarev, P. G. Zaichnevskii, M. Bakunin, P. N. Tkachev and S. G. Nechaev. This was the tradition which might be termed ‘revolutionary Machiavellism’.

French Revolution Moral Panic Political Struggle Modern Socialism Fervent Supporter
These keywords were added by machine and not by the authors. This process is experimental and the keywords may be updated as the learning algorithm improves.
This is a preview of subscription content, log in to check access.