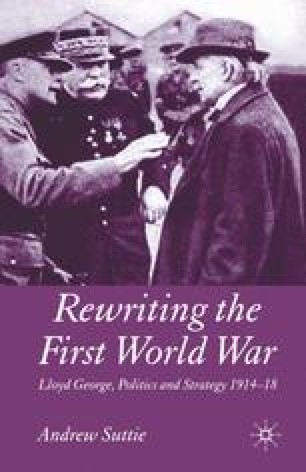 Lloyd George faced a tricky problem when it came to providing an account of 1918. How to narrate the events on the Western Front, particularly from July, without acknowledging the outstanding performance of the BEF, still under the command of Sir Douglas Haig? Lloyd George’s solution is soon evident. First, the Allied reverses suffered during the German offensives beginning on 21 March were primarily Haig’s responsibility. The BEF had been seriously weakened during the previous year’s Flanders campaign, and Haig’s inappropriate disposition of the BEF’s divisions along the entire British line and his neglect of the Fifth Army’s defences practically invited catastrophe. Second, the reversal of fortunes beginning in July and the eventual German defeat were due not so much due to Haig’s abilities, but rather because the Allies had at last found a general of ‘genius’, Foch, who in response to the setbacks in March and April, and largely due to Lloyd George’s pressure, was appointed to command Allied forces in France. Under the command of Foch, Lloyd George notes, Haig performed well, but as a ‘second-in-command’. Lloyd George’s third strategy is to downplay the significance of the Western Front in the defeat of Germany: rather, he points to the collapse of Germany’s allies, Austria, Bulgaria and Turkey, as the main factor in bringing the Germans to seek an armistice, rather than any military defeat of the German army in France.

General Staff Military Defeat Ally Strategy American Troop Military Advice
These keywords were added by machine and not by the authors. This process is experimental and the keywords may be updated as the learning algorithm improves.
This is a preview of subscription content, log in to check access.