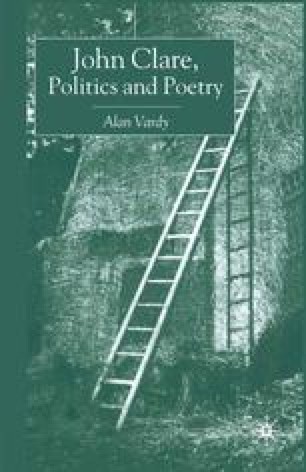 Clare was a ‘discontented’ peasant. He began as one as attested by the ‘accursed wealth’ passage in the first poem of his first volume and remained one as Lubin served as a witness to the local devastation of the countryside in The Village Minstrel. If anything, he became more bitter about the loss of his local landscape and its inhabitants. The Parish’ remained unpublished, but probably because Taylor and Hessey feared its political tone. His journal of 1824–26 recorded a profound sadness at the loss of trees, watercourses and human individuals — all destroyed by enclosure. ‘Apology for the Poor’ presented a litany of grievances brought about by these changes, and of made them a public declaration. Fortunately for readers, Clare was much more than a ‘discontented’ peasant; he was a creative genius, and out of his ‘discontent’ he fashioned a powerful and profound elegiac voice that at once mourned the passing of the things he loved and transvalued them beyond the everyday into the realm of art. To portray Clare as an isolated, conservative villager misconstrues the source and power of his art. Clare’s ‘discontent’ moved him to create poems in defence of the landscape and people he loved. It led him to develop a trenchant satiric voice that he attempted to disseminate as widely as possible, and to put himself forward as a ‘champion for the poor’ by publishing essays and letters denouncing the destruction of the rural economy and way of life and putting forward ideas for sensible reform.

Rural Economy Public Declaration Local Landscape Detailed Field Note Forward Idea
These keywords were added by machine and not by the authors. This process is experimental and the keywords may be updated as the learning algorithm improves.
This is a preview of subscription content, log in to check access.