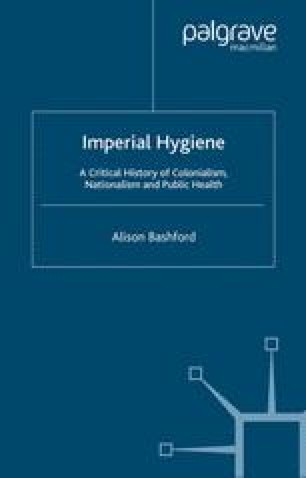 ‘Imperial cleanliness,’ wrote an early twentieth century public health bureaucrat is ‘development by sanitation … colonising by means of the known laws of cleanliness rather than by military force’.1 Like many of his contemporaries, the connection between hygiene and rule was obvious for this commentator, both commonplace and a driving mission. This relationship between public health and governance has, in many ways, been rediscovered by critical sociologists and historians of health and medicine. ‘The power to govern’, wrote one ‘is often presented as the power to heal’.2 This book is about the historical relatedness of public health and governance, hygiene and rule over the nineteenth and twentieth centuries, taking as case studies the British colonies in Australasia, and subsequently Australia itself as a white ‘settler’ society, as a colonising nation. The book is about the enclosures, boundaries and borders which were the objects and means of public health, as well as of colonial, national and racial administration. Lines of hygiene were boundaries of rule in many colonial and national contexts.3 Conversely — and this is perhaps the more novel contribution — many boundaries of colonial rule manifested as and through lines of hygiene, as spaces of public health.

Indigenous People Social Body Critical Sociologist White Settler Colonial Context
These keywords were added by machine and not by the authors. This process is experimental and the keywords may be updated as the learning algorithm improves.
This is a preview of subscription content, log in to check access.