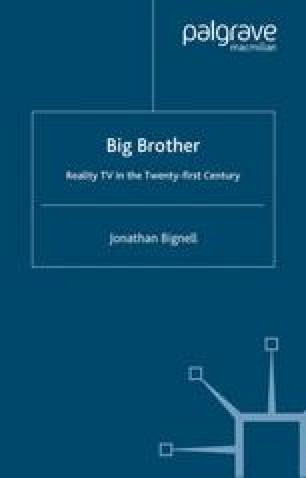 Some years before Reality TV had become an established term for a kind of television programme, Jim Collins (1989: 2) wrote that: ‘Culture is no longer a unitary, fixed category, but a decentred, fragmentary assemblage of conflicting voices and institutions’, and argued that it is no longer clear how to evaluate one discourse as more true, worthwhile or effective than another. The claim that Reality TV has both assisted in, and is an effect of, the disintegration of culture is clearly an aspect of a larger problem that has been diagnosed for some time. There is general agreement among both academic theorists and media producers that new kinds of private and public social formation are forming, deforming and reforming at the start of the twenty-first century. Like Collins, I have argued in this book that Reality TV is a nodal point at which different discourses within and outside television culture have temporarily come together in an unstable conjunction. Rather than producing coherence, the label ‘Reality TV’ and the programmes and practices that it describes are engaged in processes of self-definition and self-legitimation necessitated by the reduced purchase of an orchestrating hierarchy of value which could assign them to specific and secure places in culture.

Television Form Television Study Textual Object Genre Category Domestic Space
These keywords were added by machine and not by the authors. This process is experimental and the keywords may be updated as the learning algorithm improves.
This is a preview of subscription content, log in to check access.