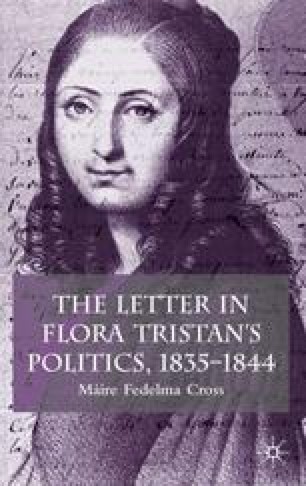 Conflicts of Authority in the Epistolary Creation of Union ouvrière

In  Chapter 3 a selection of Flora Tristan’s correspondence was examined in order to portray the common discourse of communication. The class and gender differences were negotiated by the correspondents’ manipulations around Tristan’s class and gender position. As a result of Flora Tristan’s letter writing, a polyphony of responses informed her role. The workers fed her desire to be considered by them as someone special. They identified with her construction of her role as ‘mother’ of workers or they deferred to Madame Tristan as a distant figure with whose romantic notions of worker solidarity they had little in common. In both instances they kept their distance according to their interpretation of her actions. For some she was divinely inspired, for others she was interfering. Whatever the form of spin put on this daring woman’s tactics of addressing workers and her expectations of compliance there was a convergence of interpretation of her campaign from all sides. We have also seen in the previous chapter that the term ‘worker’ was used loosely by Tristan in different contexts and included sophisticated articulate activists.  Chapter 4 discusses the vital role of the letter in the creation of the Union ouvrière project. Flora Tristan placed herself in an ambiguous class position as she sought help beyond the worker activist world particularly as many philanthropists identified with her aspirations to do something to alleviate social exclusion. The correspondence with philanthropists and workers is a yardstick of the success of Union ouvrière and a measure of the social ambiguity of her position. This chapter examines Flora Tristan’s skill in building her network of political correspondents among philanthropists and workers.

Political Programme Potential Ally Work Writer Constituent Assembly Rhetorical Style
These keywords were added by machine and not by the authors. This process is experimental and the keywords may be updated as the learning algorithm improves.
This is a preview of subscription content, log in to check access.