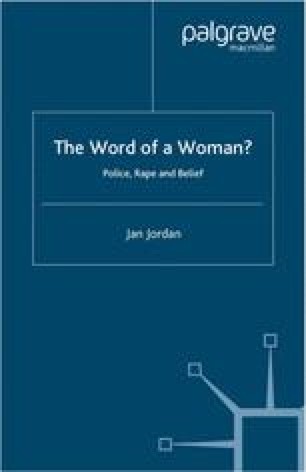 What worth the word of a woman? This book has considered this question through an examination of police responses to rape complainants, analysing these within the social and historical contexts of ideologies pertaining both to the nature of women and the nature of rape. The results of the police file analysis, presented in Chapter 4, provided insights into police decisionmaking, which were expanded upon in the material obtained from interviews with detectives (presented in Chapter 5). These data were examined and analysed against the backdrop of the historical legacy of patriarchal thinking about women and rape, outlined in Chapter 2. High levels of belief in women lying about rape have their origins in these myths and assumptions, and are enhanced further within a male-dominated police culture characterised by sexism and suspiciousness. The strain that such mistrust can place on police—complainant relationships became apparent when the victims of a serial rapist, who seldom face difficulties in establishing their credibility with the police, appraised their experiences of policing (Chapter 6). A fundamentally positive and trusting relationship between police officers and a rape complainant will provide a solid base to ensure ongoing victim cooperation, even if individual police officers do not always deliver ‘perfect’ policing in the victim’s eyes.

Police Officer Rape Myth Police Organisation Rape Victim Police Response
These keywords were added by machine and not by the authors. This process is experimental and the keywords may be updated as the learning algorithm improves.

Man is a credulous animal, and must believe something; in the absence of good grounds for belief, he will be satisfied with bad ones.