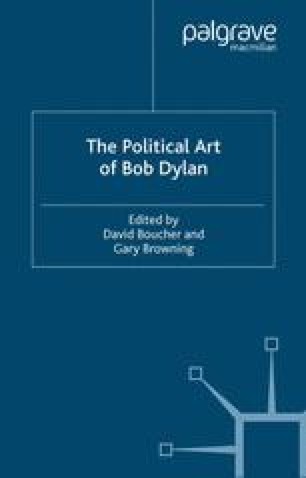 Bob Dylan’s Critique of Judgement: ‘Thinkin’ about the Law

Even if it wasn’t so conspicuously the case that rock-and-roll music as a medium could be said to voice the political and cultural aspirations of the generation that grew up in the 1960s and 1970s as much or more than any other cultural medium, much of the lyrical content of Bob Dylan’s work is explicitly political and in some of the most direct of senses — loudly critical of war, of racial prejudice, of the nuclear threat, of aspects of contemporary commercial society, of right-wing political movements in particular, of political leaders in general and of injustice. Dylan’s political personae urge and empower his audience to refuse to be exploited, not to work on ‘Maggie’s Farm’ and to get stoned in various, I assume at least partly symbolic, ways rather than submit to the potentially entrapping forces of conventional authority, or reason, or bourgeois hypocrisy. The work memorably invites its audience to experience and explore how it feels to be homeless or exiled, like a no-moss-gathering dead-beat or drop-out rolling stone (which has been no less valuable an invitation as parts of this audience have become more affluent and secure).

Ethical Absolute Protest Movement Aesthetic Response Political Sense Poker Game
These keywords were added by machine and not by the authors. This process is experimental and the keywords may be updated as the learning algorithm improves.
This is a preview of subscription content, log in to check access.