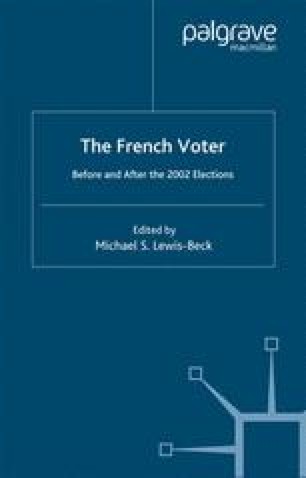 French Election Theories and the 2002 Results: An Introduction

The first round of the 2002 presidential election in France put an end, at least temporarily, to politics as usual. The impossible happened. Jean-Marie Le Pen, extreme right-wing candidate, head of the xenophobic National Front party, and pariah of the French political elite, knocked off the Socialist Prime Minister Jospin, so placing himself on the final ballot. He received 16.86 percent of the valid votes, compared to 19.88 percent for Jacques Chirac, who came in first. Lionel Jospin, in third place with 16.18 percent, was suddenly no longer a contender. The result surprised virtually everyone. No politicians, pollsters or pundits, of whatever political stripe, saw the first-round defeat of Jospin, or the imminent triumph of Le Pen, as even a remote possibility. The prime minister, after absorbing the news, made a silent withdrawal from the campaign arena. President Chirac, standing embarrassed in the eyes of the democratic world, pledged a defense of traditional republican values against the extremist threat. Essential leaders on the left, quickly enough, rallied to the cause and threw their support behind Chirac. In a victory unprecedented in the history of the Fifth Republic, Gaullist Chirac garnered 82.21 percent of the second-round vote, giving Le Pen a through drubbing. The dignity of French democracy appeared restored, as well as the usual norms of electoral politics. Or were they?

Prime Minister Presidential Election Party Identification Vote Choice Electoral Politics
These keywords were added by machine and not by the authors. This process is experimental and the keywords may be updated as the learning algorithm improves.
This is a preview of subscription content, log in to check access.