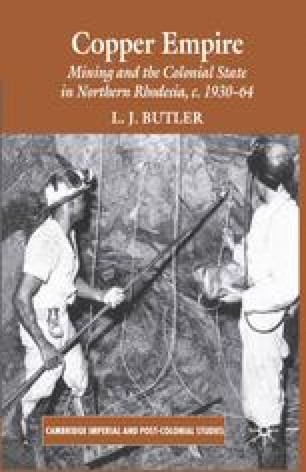 The Copperbelt and the Central African Federation (1949–1957)

It was during the 1950s that the Copperbelt finally attained the kind of prominence in international mining, and the stature among copper producers, which some commentators had long predicted it might one day achieve. In the seven years after 1953, copper production rose by over a half, and by 1956, when export earnings reached their peak, Northern Rhodesia ranked second only after the United States as a copper producer.1 Helping to create these ‘boom’ conditions was the continuing buoyancy of world demand, resulting in part from rising demand from the defence industries, and in particular the expanded Western rearmament programmes triggered by the Korean War after 1950, and government policies aimed to promote the stockpiling of essential strategic minerals.2 At least in the earlier part of this period, it was still expected by the imperial government that the colonies would continue to play a useful role in supporting the metropolitan economy. The post-war Labour government had embarked on an ambitious, if not always judicious, drive to expand colonial commodity production, with the twin, complementary aims of defending sterling’s world role and promoting domestic reconstruction. The return of the Conservatives in 1951 saw no weakening of London’s resolve to strengthen the prospects for British solvency by drawing upon the Empire-Commonwealth’s resources, especially of minerals. 5 The Copperbelt and the Central African Federation (1949–1957)

Mining Industry Mining Group Mining Company Northern Territory British Government
These keywords were added by machine and not by the authors. This process is experimental and the keywords may be updated as the learning algorithm improves.
This is a preview of subscription content, log in to check access.