Diachronic Change in the English Passive 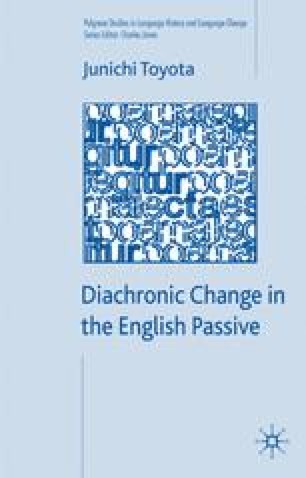 Diachronic Change in the English Passive pp 1-7 | Cite as

The subject matter of this book is the semantic and pragmatic analysis of the English passive voice in diachronic perspective. The passive voice has received much attention over the past several decades. Grammatical voice itself is complex and there are a number of properties yet to be analysed. A large number of previous publications are dedicated to issues of grammatical voice per se (e.g. Siewierska 1984; Keenan 1985; Kemmer 1993; Geniušienė 1987; Kleiman 1991; just to name a few) or to the interrelationship within the voice systems, sometime known as the voice continuum (e.g. Croft 1994, 2001: 283–319; Givón 1990: 563–644; Palmer 1994: 142–75; Shibatani 1985, 1998), which reveal that the active, passive and middle voices are somehow related to each other and that there are certain patterns among them, as we will examine in detail in Chapter 3.

Past Participle Passive Voice Adjectival Passive Pragmatic Analysis Diachronic Change
These keywords were added by machine and not by the authors. This process is experimental and the keywords may be updated as the learning algorithm improves.
This is a preview of subscription content, log in to check access.