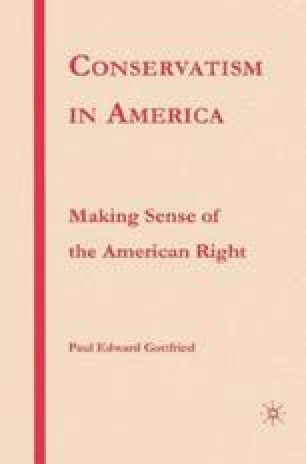 The preceding text raises so many questions that my conclusion will address some of the more obvious ones. A sweeping critique of this work came from my older son, a distinguished physician and corporate attorney, who maintained that I would be wasting my time with this kind of study. While changes have undoubtedly occurred in the American conservative movement since the middle of the last century, there is no sufficient reason, he argued, to abandon the label “conservative” that both the establishment Left and the establishment Right have attached to the same positions and personalities. The public knows exactly what this label means, and so there is no need to argue from what that term used to mean that it couldn’t take on a more up-to-date connotation. Virtually everyone now understands that a person who advocates restrictions on abortion, objects to homosexual marriage, and favors military intervention to achieve our government’s international goals must be “conservative.” Why then should one quibble about the meaning of “conservative” by resurrecting the obsolete self-image of those who once called themselves “conservatives”?

Welfare State Foreign Policy Republican Party Judicial Activism National Review
These keywords were added by machine and not by the authors. This process is experimental and the keywords may be updated as the learning algorithm improves.
This is a preview of subscription content, log in to check access.