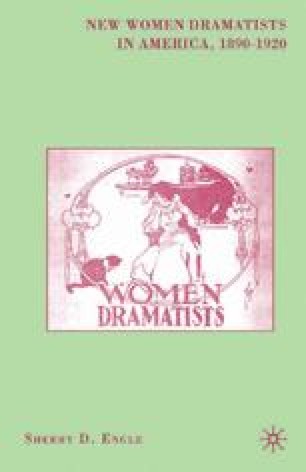 Rida Johnson Young created well over thirty plays and musicals, along with numerous popular songs during the first two decades of the twentieth century. Her prodigious output was the result of maintaining a practical writing schedule. “Regularity in work,” explained Young, “is one of the biggest helps to success.”3 Young, who often played down her own accomplishments in interviews, related that another key factor to her success was “never undertaking anything really big” and writing plays that were popular and within her ability.4 But Young also excelled at finding venues for her talents as playwright, lyricist, and songwriter, creating popular dramatic works and songs that brought her both celebrity and wealth. What is more, managing her own business affairs, she usually served as her own agent, took an active role in the casting and rehearsing of productions, and formed professional alliances with the likes of Daniel Frohman, Lee and J. J. Shubert, and Isidore Witmark of Witmark Music Company. When she died in 1926, the dramatist left behind a remarkable body of work, along with a number of unproduced plays.

Lottery Ticket Musical Score Musical Play Business Affair York Public Library
These keywords were added by machine and not by the authors. This process is experimental and the keywords may be updated as the learning algorithm improves.

Every morning from 8 to 1 in the afternoon I slave at my typewriter. No matter how I feel, no matter whether I have any inspiration or not, I set about my task with absolute regularity and keep at it the allotted time.