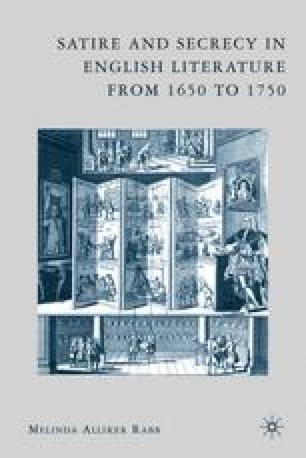 From Lucilius to DeLillo, from the biblical Book of Revelations to the blotted FBI documents in Michael Moore’s film Fahrenheit 9/11, satiric writing has a long-standing association with the concept of secrecy. This association helps to bridge the gap dividing postmodern subjects from millennia of now remote, linguistically inaccessible, or little-studied satirists. How many admirers of The Onion, The Daily Show, or Borat have read Horace, Persius, or Juvenal? Bogel notes “the surprisingly small step from seventeenth-century characterizations of wit and satire as shapeless and inchoate to late twentieth-century designations of satire as ‘that most protean literary something’” (4). In the 1690s, Dryden’s Discourse concerning Satire articulated an ideal for ironic aggression as “the fineness of the Stroak that separates the Head from the body, and leaves it standing in place” (D 4:71). In the 1990s, Nelson Algren had similar praise for Don DeLillo’s quintessentially postmodern satiric narratives in which “wit is so surgical you don’t even know an artery has been severed.” Both periods struggle with the ‘disconnect’ between abundant information and lack of truth. In MacFlecknoe “trash” pollutes the Thames and clogs the streets with worthless sheets from booksellers’ stalls. Throngs of dunces crowd London only to sink into intellectual and moral anarchy in Pope’s Dunciad.

Hide Scheme Early Eighteenth Century Late Seventeenth Hide Meaning Cuban Missile Crisis
These keywords were added by machine and not by the authors. This process is experimental and the keywords may be updated as the learning algorithm improves.

—Pynchon, The Crying of Lot 49