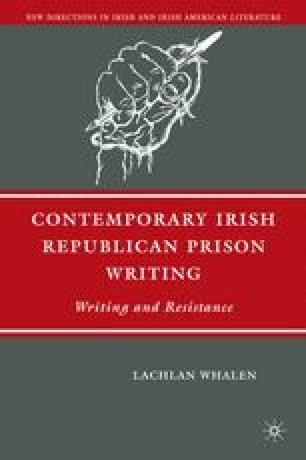 Postscript: “You Look Like Jesus Christ”: Images of Republican POWs in Contemporary Cinema

Midway through the film Some Mother’s Son, Gerard—a newly incarcerated Irish Republican Army prisoner—is shocked at Bobby Sands’ appearance. It is 1980—the height of the Blanket and No-Wash Protests for political status in the H Blocks. Though his reputation precedes him as officer commanding (OC) of the Republican prisoners in the H Blocks, Sands’s scraggly beard and long hair make him unrecognizable to Gerard. “Do I look that bad?” Sands asks his new cellmate with a chuckle. “You look like Jesus Christ!” replies Gerard, only half-joking, his smile dissolving into a look of startled concern.1

British Government Prison Officer Officer Commanding Hunger Strike Criminal Conspiracy
These keywords were added by machine and not by the authors. This process is experimental and the keywords may be updated as the learning algorithm improves.
This is a preview of subscription content, log in to check access.