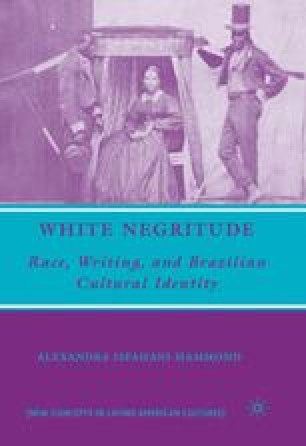 This is not a history book. It is an analysis of Brazilian mestiçagem. I think this discourse in relation to Homi Bhabha’s theorization of colonial authority’s duplicitous hybridity, whose legitimacy rests simultaneously on its incorporation of, and radical difference from, the colonized object (The Location of Culture, 1994). My book is also a study of paratextuality, for the majority of the works considered reflect on the writing process. Two of them are prefaces, and resonate with white-authored apologies for black writing, from U.S. introductions to slaves’ narratives to Jean-Paul Sartre’s “Black Orpheus.”1 The critical difference is that the primary texts enframed here are themselves white-authored. Of course, white authorship is not itself the problem. Frantz Fanon reflects on the masquerade of Léopold Sédar Senghor’s Afrocentrism: “From the opposite end of the white world a magical Negro culture was hailing me. Negro sculpture! I began to flush with pride. Was that our salvation?” (Black Skin, White Masks, 1952, 123).2 Blackness as rhythmic aesthetic coincides seamlessly with the lesson Fanon learns when he is immobilized by the white gaze: “the glances of the other fixed me there, in the sense in which a chemical solution is fixed by a dye” (109). The result of this scrutiny is insight into the interface of race science with afrocentrism, both connected to an ultimately eurocentric enframing: “I subjected myself to an objective examination, I discovered my blackness, my ethnic characteristics; and I was battered down by tom-toms, cannibalism, intellectual deficiency, fetishism, racial defects, slave-ships, and above all: ‘Sho good eatin’ ” (112).

Affirmative Action Black Participant Racial Defect White Supremacism Race Science
These keywords were added by machine and not by the authors. This process is experimental and the keywords may be updated as the learning algorithm improves.

The chief witness in Reconstruction, the emancipated slave himself, has been almost barred from court.

Don’t go getting offended by my use of the quote unquote “n” word. I’ve a black wife and two biracial kids so I feel I have a right.