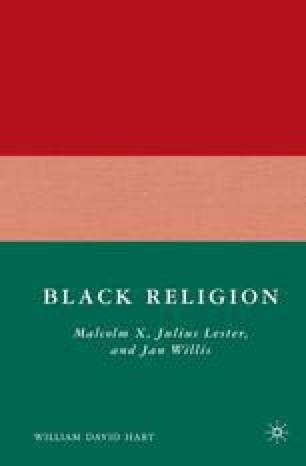 In 1964 Malcolm fled. One step ahead of spies and assassins, he fled the political and religious confines of the United States. His trip to the Holy City of Mecca appears as both a pilgrimage and a search for refuge, both Hajj and Hijrah. This chapter is an extended meditation on the introductory epigraphs.

Black People White People Federal Bureau Black Church White Supremacy
These keywords were added by machine and not by the authors. This process is experimental and the keywords may be updated as the learning algorithm improves.

And proclaim among men the Pilgrimage: they will come to you on foot and on every lean camel, coming from every remote path.

He who forsakes his home in the cause of Allah, finds in the earth Many a refuge, wide and spacious: Should he die as a refugee from home for Allah and His Messenger, His reward becomes due and sure with Allah: And Allah is Oft-Forgiving, Most Merciful

The death talk was not my fear. Every second of my twelve years with Mr. Muhammad, I had been ready to lay down my life for him. The thing to me worse than death was the betrayal. I could conceive death. I couldn’t conceive betrayal—not of the loyalty which I had given to the Nation of Islam, and to Mr. Muhammad. During the previous twelve years, if Mr. Muhammad had committed any civil crime punishable by death, I would have said and tried to prove that I did it—to save him—and I would have gone to the electric chair, as Mr. Muhammad’s servant.