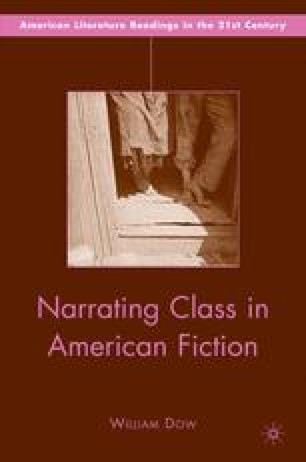 Conceiving of the term “class” as it works within the terrain of culture, this study has asserted its essentially discursive nature and how this term might be used to organize texts and to articulate the social relations between texts and readers. From Whitman’s incarnational epistemology to London’s and Le Sueur’s valorizations of real experience as the legitimating source of narrative authority, all of the writers in this book were concerned with the dilemma of finding a language for representing a reality lived by others in the face of readership often far from such realities. Yet while acknowledging that the term class refers to an objective set of material conditions (or relations) that can be observed in society, this study has emphasized that such an objectivity cannot be taken too far. Class, as John R. Hall has argued, can no longer “be conceived as a ‘structure’ in its own terms, constituted as either a historical subject—‘the’ engine of history—or a theoretical objective of ‘objective’ empirical dynamics” (2). Instead, as this study asserts, class is itself a dynamic, discursive product of history; it is, as E. P. Thompson emphasized in The Making of the English Working Class, “a relationship, not a thing” (10–11). To come to terms with the challenges of class representations, and with such issues as cross-class encounters and class mobility, we need to understand the function of literary theory that can make discussion of class possible and yet at the same time account for class in its historicity.

American Writer Class Mobility Aesthetic Form North American Literature Discursive Product
These keywords were added by machine and not by the authors. This process is experimental and the keywords may be updated as the learning algorithm improves.
This is a preview of subscription content, log in to check access.