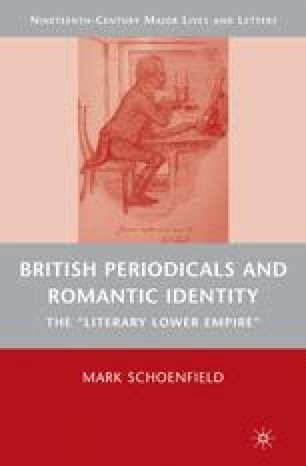 Lord Byron first used the concept of a literary “lower Empire” in an 1817 letter to John Murray, to contrast the “wrong revolutionary poetic system—or systems” of contemporary authors with the greater empire of Alexander Pope:

I took Moore’s poems & my own & some others — & went over them side by side with Pope’s—and I was really astonished (I ought not to have been so) a nd mortified - at the ineffable distance in point of sense—harmony—effect—and even Imagination Passion—& Invention—between the little Queen Anne’s Man—& us of the lower Empire-(BLJ 5:265)

In 1823, Byron deployed the phrase again in Don Juan. Describing a society in which every “paltry magazine” produces its “greatest living poet” (XI.54.7–8) who struts and frets, as Byron had, on the public stage, he declares:

This is the literary lower empire, Where the prætorian bands take up the matter;— … Now, were I once at home, and in good satire, I’d try conclusions with those Janizaries, And show them what an intellectual war is. (XI.62.1–8)

Romantic Period Corporate Identity Periodical Press Literary Identity Romantic Identity
These keywords were added by machine and not by the authors. This process is experimental and the keywords may be updated as the learning algorithm improves.
This is a preview of subscription content, log in to check access.