A Jungian Study of Shakespeare 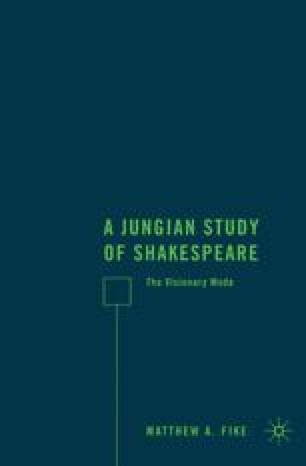 Dives and Lazarus in The Henriad
Chapter

We have observed so far that Jung’s “visionary mode” involves the conveyance of unconscious content through dream, imagination, vision, and myth; but myth is clearly not limited to classical material such as Jessica and Lorenzo’s love duet. Biblical myth functions the same way, and it is to Falstaff’s allusions to a particular Bible passage that we now turn in connection with two key concepts. Whereas, in chapter 2, a brief mention of Jungian inflation arises from an analysis of classical myth in The Merchant of Venice, the present chapter examines in detail Jung’s statements on inflation, along with those on the trickster, in order to illuminate Falstaff’s frequent allusions in The Henriad to the story of Dives and Lazarus. The assumption here—that Falstaff himself is a trickster—is argued by Edith Kern in “Falstaff—A Trickster Figure”:

Falstaff, rather than merely serving as the scapegoat upon whose back are loaded the sins of Prince Hal, acquires instead the ambivalence of the American-Indian Trickster, redeeming and redeemed, martyred and ultimately ascending into the heavens. The subtle biblical allusions [that Roy] Battenhouse discovered and uncovered within the play fit with such ease the trickster pattern in all its ramifications that it would be wrong to ignore its theatrical and carnivalesque tradition that was known to Shakespeare as well. We should not see Falstaff exclusively, therefore, in the noble light that Battenhouse sheds upon him.1

Psychological Possession Bible Passage Classical Myth Henry Versus Christian Spirit
These keywords were added by machine and not by the authors. This process is experimental and the keywords may be updated as the learning algorithm improves.

Anyone who belongs to a sphere of culture that seeks the perfect state somewhere in the past must feel very queerly indeed when confronted by the figure of the trickster. He is a forerunner of the saviour, and, like him, God, man, and animal at once.

Jung, “On the Psychology of the Trickster Figure”