Forgery in Nineteenth-Century Literature and Culture 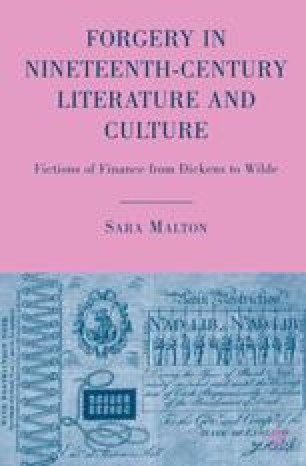 The Criminal Aesthetic: Recapturing the Forger at the Fin-de-Siècle

While clearly granting the forger a much more central position in its narrative economy than earlier novels, Dr. Jekyll and Mr. Hyde nonetheless shows a marked urgency to suppress the forger, to mark him as that “other” counterfeit self and to conceal him within what Elaine Showalter aptly terms “Dr. Jekyll’s closet.” I turn now to two authors whose works allow the forger to come out of the closet, as it were, and take center stage, Thomas Hardy and Oscar Wilde. Hardy’s A Laodicean (1881) and Wilde’s The Picture of Dorian Gray (1891) are remarkably attentive to the typology of the forger operative in earlier fiction, a typology that, as I have shown, persistently envisions the forger as financially and genealogically illegitimate. Like Stevenson, Wilde and Hardy frequently reinscribe this typology to the point of parody, but their highly self-conscious treatment of the forger registers a significant transition of this criminal’s depiction in nineteenth-century narratives, as it serves to overtly question the legitimacy of various social and, indeed, literary fictions themselves.

Mass Culture Pure Gold Authentic Identity Literary Fiction Authentic History
These keywords were added by machine and not by the authors. This process is experimental and the keywords may be updated as the learning algorithm improves.

[T]he only real people are the people who never existed, and if a novelist is base enough to go to life for his personages he should at least pretend that they are creations, and not boast of them as copies.