Two Centuries of Compensation for U.S. Production Workers in Manufacturing 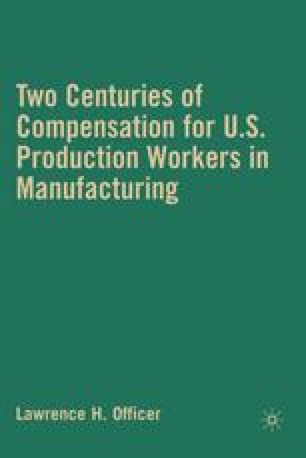 Two Centuries of Compensation for U.S. Production Workers in Manufacturing pp 165-180 | Cite as

Table 7.1 presents the main results of the book: the time series of average hourly compensation (AHC, the sum of AHE and AHB), average hourly earnings (AHE, constructed in chapter 5), and average hourly benefits (AHB, constructed in chapter 6). AHB is assumed zero until 1900, then computed for positive values but rounds up to a level of one-tenth of one cent only in 1912. The three variables are rounded to a tenth of a cent (that is, shown to three decimal places) until AHB reaches one cent, which happens in 1936. From then on, the variables are rounded to the nearest cent.

Real Wage Nominal Wage Wage Growth Annual Earning Average Annual Growth Rate
These keywords were added by machine and not by the authors. This process is experimental and the keywords may be updated as the learning algorithm improves.
This is a preview of subscription content, log in to check access.