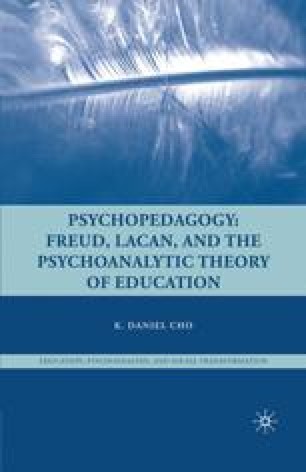 Education by Way of Truths: Lacan with Badiou

Jacques Lacan’s diagram of the discourse of the analyst, as seen in Figure 6.1, presents a peculiarity in that it locates knowledge (S2) in the position of truth. What does it mean to say that knowledge occupies the place of truth? In seminar XVII, Lacan himself recognizes that there is something deeply ambiguous in this idea: “We are properly speaking condemned to only being able, even on this point, still vague for us, about the relationship between knowledge and truth, to declare anything at all.”1 On the one hand, knowledge functions as truth in the sense that at the end of analysis the truth of the unconscious emerges. On the other hand however, Lacan senses something more at stake. In a lecture given a few years before seminar XVII entitled “Science and Truth,” Lacan issues this challenge: “I will take it up now only to pose you analysts a question: does or doesn’t what you do imply that the truth of neurotic suffering lies in having the truth as cause.”2 Here, Lacan suggests that what is important in psychoanalysis is that it deploys the function of “the truth as cause”—but the cause of what exactly? In seminar XVII, Lacan sheds some more light, claiming that the truth causes “only a collapse of knowledge” (S XVII:186). He goes on to say that it is a collapse that “creates a production” (186).

Original Emphasis Previous Regime Tonal Music Substantive Claim Chinese Peasant
These keywords were added by machine and not by the authors. This process is experimental and the keywords may be updated as the learning algorithm improves.
This is a preview of subscription content, log in to check access.