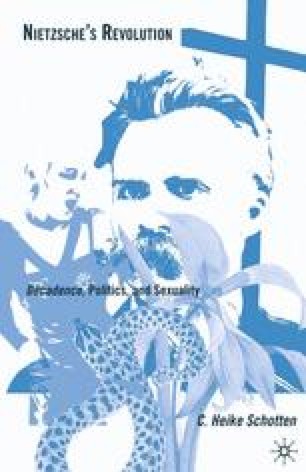 In the Genealogy, Nietzsche writes of the artist that “if he were it, he would not represent, conceive, and express it: a Homer would not have created an Achilles nor Goethe a Faust if Homer had been an Achilles or Goethe a Faust.”1 The unspoken, yet implied, addition to this obviously unfulfilled triumvirate is, of course, Nietzsche himself: did Nietzsche create a Zarathustra because he could not be a Zarathustra? A tempting interpretation, especially given Nietzsche’s boundless praise of this figure and his warning in Ecce Homo that “I am one thing, my writings are another matter.”2 Yet Nietzsche also says disparagingly of artists in the very next aphorism that they are always only the “valets of some morality, philosophy, or religion.” Artists lack the ability to “stand apart; standing alone is contrary to their deepest instincts.”3 By contrast, real creators— philosophers—demand solitude. Unlike artists, whom Nietzsche says always require some “established authority.”4 for direction, philosopher-creators must determine their own why and how, their own goal and virtue: “A virtue must be our own invention, our most necessary self-expression and self-defense: any other kind of virtue is merely a danger.”5 To be able to be such a creator demands self-ostracism from the crowd of common ideas and morality, which have nothing but suspicion and contempt for the hermit.

Christian Morality Loving Life Death Drive Eternal Recurrence Revolutionary Politics
These keywords were added by machine and not by the authors. This process is experimental and the keywords may be updated as the learning algorithm improves.

The whole pose of “man against the world,” of man as a “world-negating” principle, of man as the measure of the value of things, as judge of the world who in the end places existence itself upon his scales and finds it wanting—the monstrous insipidity of this pose has finally come home to us and we are sick of it. We laugh as soon as we encounter the juxtaposition of “man and world,” separated by the sublime presumption of the little word “and.” But look, when we laugh like that, have we not simply carried the contempt for man one step further? And thus also pessimism, the contempt for that existence which is knowable by us? Have we not exposed ourselves to the suspicion of an opposition—an opposition between the world in which we were at home up to now with our reverences that perhaps made it possible for us to endure life, and another world that consists of us—an inexorable, fundamental, and deepest suspicion about ourselves that is more and more gaining worse and worse control of us Europeans and that could easily confront coming generations with the terrifying Either/Or: “Either abolish your reverences or—yourselves!” The latter would be nihilism; but would not the former also be—nihilism?—This is our question mark.