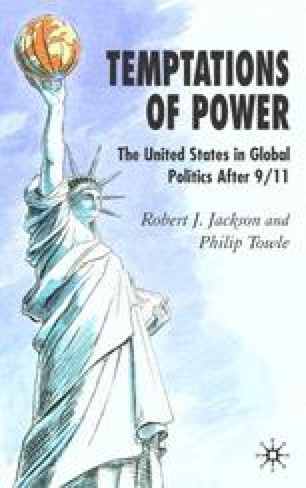 Grappling with the New World: Concepts and Realities

This book demonstrates the inadequacy of the American response to the terrorist attacks on New York and Washington on September 11 2001. It contests the American argument that terrorism can be stopped by making preventive attacks on countries that harbour enemies or by occupying the lands of other people and shows how the Bush doctrine, with its ascendant principle of preventive war, is inherently faulty. The coercive action in Iraq, combined with the combative rhetoric towards the other ‘axis of evil’ countries, has done more harm than good. The consequences in terms of dead and wounded, economic burdens and reduced freedoms have been alarming, and there is no end in sight.

International Relation Security Council Terrorist Attack State Sovereignty Security Dilemma
These keywords were added by machine and not by the authors. This process is experimental and the keywords may be updated as the learning algorithm improves.
This is a preview of subscription content, log in to check access.