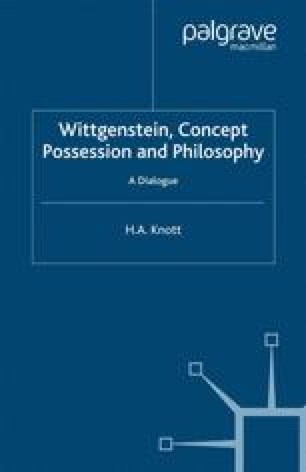 Concepts of the Subject

CRATES: If we want to judge whether a child has the concept of colour beyond the ability merely to make correct judgements as to the colour of an object, we will probably look first at the way that the concept is woven into the child’s use of language as a whole: in her ability to talk sense with the concept and to distinguish sense and nonsense in the way the concept is used in conversation generally. We would also look at the way that the child shows appreciation of the subjective qualities of coloured objects: the way she makes comparisons among colours, expresses likes and dislikes, makes judgements as to the harmony or disharmony between colours, and so on. And we would look at the way that she reacts to other people’s judgements about and reactions to colours. These all belong to the child’s possession of the concept colour, and they show whether she has got hold of the grammar of ‘colour’. But what they also show is that her having a concept of colour involves not just linguistic competence in a narrow sense, but engages with her subjective relations and responses to coloured objects. Similar considerations will apply, mutatis mutandis, to any concepts in which subjective reactions such as these play a part, including, for example, our reactions to the pain and suffering of others. It is the rôle of the individual’s subjectivity in the possession of psychological concepts that we shall be discussing in this dialogue. We shall occasionally speak of ‘subjective concepts’, which may be regarded as a subclass of psychological concepts, relating mostly to perception and sensation, where we wish to emphasize the subjective component.

Subjective Quality Subjective Judgement Mental Life Psychological Concept Subjective Concept
These keywords were added by machine and not by the authors. This process is experimental and the keywords may be updated as the learning algorithm improves.
This is a preview of subscription content, log in to check access.