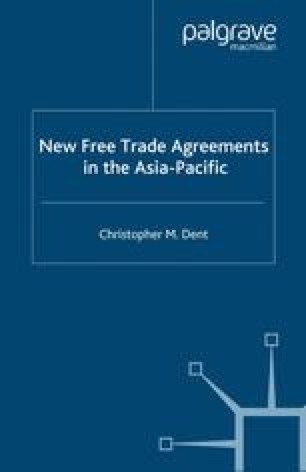 New FTAs in the Asia-Pacific: Towards Lattice Regionalism?

Chapter 1 presented an overview of the new FTA trend in the Asia-Pacific, which has been a predominantly bilateral FTA trend. Chapter 2 then examined the FTA policies of various Asia-Pacific countries, and this was followed in Chapter 3 by case studies on individual FTA projects. Together, these chapters provided wide-ranging macro and micro perspectives on the region’s FTA trend. In this chapter, we discuss the broader international political economy implications of this new trade bilateralism, particularly regarding its impact upon economic regionalism in the Asia-Pacific. The relationship between economic bilateralism and regionalism has become an increasingly important to understand given the intensification of both forms of international association and linkage not just in the Asia-Pacific but also in other regions. We first analyse the nature and development of economic bilateralism and regionalism before presenting the ‘lattice regionalism’ hypothesis, which posits that an increasingly dense pattern of bilateral FTA activity positively contributes to regionalism processes and to regional community-building generally. The analytical framework for the lattice regionalism hypothesis is set out based on the two counter-perspectives of ‘region-convergent’ bilateralism and ‘region-divergent’ bilateralism.

Trade Liberalisation Free Trade Agreement North American Free Trade Agreement Economic Partnership Agreement ASEAN Member State
These keywords were added by machine and not by the authors. This process is experimental and the keywords may be updated as the learning algorithm improves.
This is a preview of subscription content, log in to check access.