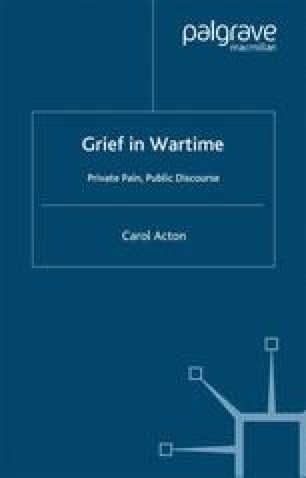 The War at Home
Chapter

Writing to her missing husband in the Second World War, Marjorie Gaunt, like millions of others mourning the missing and the dead, must confront his absence and at the same time maintain a public face that erases her private pain. Vietnam grief narratives, mostly written after the war, also emphasise the silencing of grief, not in the interests of morale, but because the political climate was so divisive that to claim grief was to claim a shameful connection with the war. Yet, once that silence is broken, long after the war, the missing body that is Gaunt’s husband is replaced in post- Vietnam War grief narratives by the public representation of the body as it legitimises and makes visible the grief and loss that was silenced during the war. Arguably, the display of bodies that has become a trope of Vietnam War writing, by combatants and non-combatants, is also a revealing of those bodies that were concealed by censorship in earlier wars. Moreover, while grief may have been silenced during the war, post-war writing puts bodies on display in an angry protest against what Scarry calls ‘the disowning of injury’ that happens in all wars. Thus, we find in narratives that come long after the war, such as Heather Brandon’s collection Casualties (1984) and Laura Palmer’s Shrapnel in the Heart (1987), as well as in the fulllength memoirs Mullen’s Unfriendly Fire (1995) and, much more recently, Laurent’s Grief Denied (1999) and Spears Zacharias’s Hero Mama (2005)

Dead Body Body Count Vietnam Veteran Bereave Parent Protest Movement
These keywords were added by machine and not by the authors. This process is experimental and the keywords may be updated as the learning algorithm improves.
This is a preview of subscription content, log in to check access.