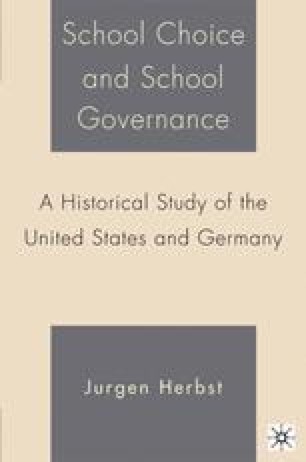 School choice, as we have seen, did not arise as an issue until the appearance of the modern national state. Then the question whether or not to send a child to public school became both a question for parents in their individual households and a debated public issue. It confronted everyone, parent and childless taxpayer alike, with the question to what extent a secular community—be it a town, a state, or a nation—could compel its citizens to hand over to them the education of their children. Could the state as parens patrice override the rights of parents as the determinators of their children’s education and educate children in loco parentis? Was this a legal question, one to be decided in the last analysis by the crown as sovereign or by the people or their representatives in legislative assemblies and judicial bodies, or was it a moral issue to be settled by appeal to Scripture or natural law? Was it, finally, a matter to be turned over for decision to pedagogical expertise and professional educational wisdom? What kind of matter was this public education? One to be left to the discretion of individual parents or one to be decided by the community as a whole? Whose interest was it to serve, the individual’s, the local community’s, or society’s in general? And if, as the name suggests, it was a matter for public disposition, how far could the public interfere in what many considered to be a most intimate sphere of private family life?

Civil Society Public School Private School Charter School Religious Instruction
These keywords were added by machine and not by the authors. This process is experimental and the keywords may be updated as the learning algorithm improves.
This is a preview of subscription content, log in to check access.