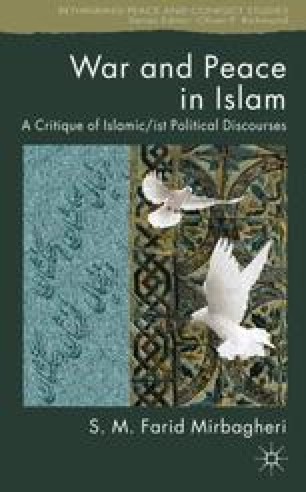 Introduction: Framework of Analysis and Setting the Questions

A scholarly assessment of Islamic discourses on peace and war in their varieties, and their contextualisation in time and place in relation to Western paradigms and theories, would serve more than just an academic purpose. Such a study could potentially expose the ineptitude of current Western thinking on Islam and Muslims on the one hand and illustrate the instrumentalisation of Islam by Islamist fundamentalists and many Muslim politicians on the other. The analogy of Islamic and Western philosophies, in the field of war and peace, reflects the need in our time to engage the two in a dialogical intellectual discourse. The advance of critical theory in International Relations opens up space for Islamic tradition to register, propound and interact with the prevalent Western outlook on peace and war. Through such an interaction the Islamic tradition can trade, inform and learn from Western discourses. The school of Gnosticism in Islam in particular may be able to contribute to debates on origins, management and resolution of conflicts engaging when necessary Islamic political philosophy vis-à-vis Western thinking in the field. Thus Hobbes, Locke and Marx, as well as contemporary IR theorists such as Walts, Huntington, Nye and Cox, can be discussed in relation to Avecina, Averose, Farabi, Ghazzali, Ibn Khaldun and others.

Armed Conflict Critical Theory Pedantic Rationality Worldly Affair Islamic Tradition
These keywords were added by machine and not by the authors. This process is experimental and the keywords may be updated as the learning algorithm improves.
This is a preview of subscription content, log in to check access.