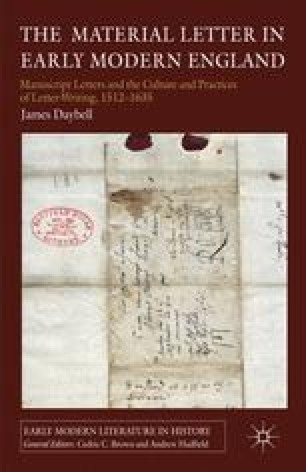 While the previous two chapters were concerned with materials, tools and technologies of letter-writing, this chapter concentrates on investigating the meanings attached to distinct physical characteristics and attributes of letters, paying particular attention to the social signs, codes and cues inscribed materially within the form. Several scholars including A.R. Braunmuller and Jonathan Gibson among others have drawn attention to the material meanings of early modern English letters, especially as they relate to the problems of editing. Building on this initial work the present chapter, which is based on the examination of well over 10,000 manuscript letters, offers a detailed examination of the social significance of a complex range of physical aspects of early modern correspondence.1 It considers a broad cross-section of letter-writers from elite and non-elite backgrounds, mercantile and professional groups, men as well as women, and by writers of different generations, children as well as adults. In addition it analyses varying types or categories of letters, including formal petitions, official correspondence, love letters, letters of condolence, familiar or private letters. It thus broadly examines how the physical forms of the English letter changed over the period, considering the impact of social status and gender and codes of deference and humility, as well as the form, function and material conditions of writing.

Seventeenth Century Social Sign Blank Space Material Letter Hand Corner
These keywords were added by machine and not by the authors. This process is experimental and the keywords may be updated as the learning algorithm improves.
This is a preview of subscription content, log in to check access.