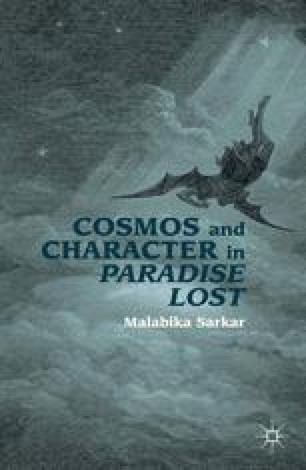 Cosmos and Character in Paradise Lost pp 63-81 | Cite as

“This Pendent World”: The Cosmos of Paradise Lost

At the end of his long journey from hell through chaos, Satan arrives within sight of “the empyreal heaven, extended wide / In circuit” (2.1047–48) and sees “fast by hanging in a golden chain / This pendent world” (2.1051–52). As readers, this is our first encounter with Milton’s new cosmos, one of the most remarkable innovations in Paradise Lost, and the suggestive phrase—this “pendent world”— captures the essential ambiguity in the epic poet’s imaginative depiction of the universe. The range of possible meanings of “pendent” expands through its homophonic association with “pendant” to signify both the state of the new cosmos as being contingent and uncertain, as well as the appearance of the new cosmos as a jewel hanging from heaven on a golden chain. The associated “pendant” urges us to consider the new cosmos as a precious gem as well as a work of art. We are invited to look at it as an auxiliary visual object just below heaven, like a pendant painting below that grander canvas. However, the perspective on its size as being like “a star / Of smallest magnitude close by the moon” (2.1052–53) is a deeply troubling one as the moon, to which heaven is apparently being compared here, has no light of its own and shines with borrowed light unlike a star, even the least significant one with which the cosmos is being compared, which has light of its own.

Space Flight Vitalist Debate Concentric Sphere Paradise Lost Cosmic Space
These keywords were added by machine and not by the authors. This process is experimental and the keywords may be updated as the learning algorithm improves.
This is a preview of subscription content, log in to check access.