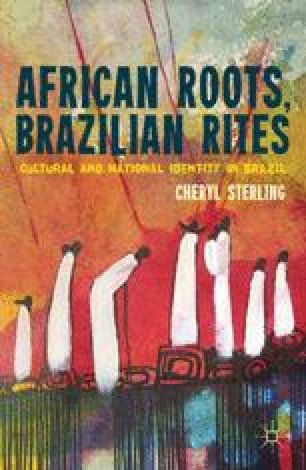 Introduction: What Roots? Which Routes?

Issues of identity are considered part of the hallmark of modern consciousness. If we view modernity as the point from which to give voice to rupture and displacement, queries such as who am I? and where do I belong? arise out of the modern subject. This is why Paul Gilroy (1993 ) relocates the discourse of modernity to the triangular route of the slave trade, renaming it the black Atlantic. For who else but the enslaved Other (and their descendants) embodies this crisis of nonbelonging to the extent that it transcends existential angst to develop into new myth-making realities. This work’s engagement with Afro-Brazilians’ articulations of Africanness and blackness incorporates their quest for rootedness in Africa but also places them in the unified oeuvre of diaspora space that Gilroy reconceptualizes to include the history of enslavement, racism, and the engagement of black peoples with practices of nation building, citizenry, and modernization in the Western discourse of modernity.

Racial Identity Modern Subject Hegemonic Discourse Western Discourse Latin American Politics
These keywords were added by machine and not by the authors. This process is experimental and the keywords may be updated as the learning algorithm improves.

To speak means to be in a position to use a certain syntax, tograsp the morphology of this language, but it means above all to assume a culture, to support the weight of civilization.

Fanon, Wretched of the Earth

What is spoken or silenced depends on who is speaking, who is doing the documenting, from whose perspective, by whose criteria, and what is being recorded.