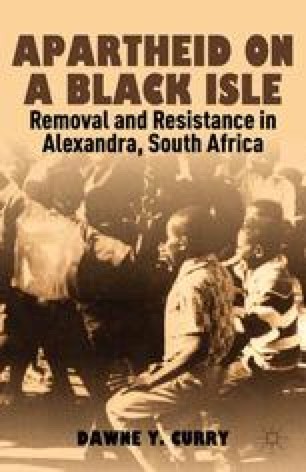 “We Are Too Old to Move, Where Are We to Go?”: Forced Removals in Alexandra

In 1971,65-year-old shoemaker and barber Jackson Banyeni received a notice to vacate his property from Alexandra’s governing and policing authority, Peri-Urban Areas Health Board (Peri-Urban). Peri-Urban gained control in 1958, when it replaced the Health Committee1 that had managed the township’s affairs since 1916. Charged with the responsibility of ending gang rule,2 and conducting pass3 raids, Peri-Urban consisted of African and White police officers who enforced law and order throughout the township.4 Peri-Urban was also empowered with banishment orders, which longtime activists Reverend A. A. Tanci and Azikwelwa (We Will Not Ride!) bus boycott leader Dan Mokonyane received in 1960.

Property Owner South African Government Family Accommodation Affected Party Corrugate Iron
These keywords were added by machine and not by the authors. This process is experimental and the keywords may be updated as the learning algorithm improves.
This is a preview of subscription content, log in to check access.