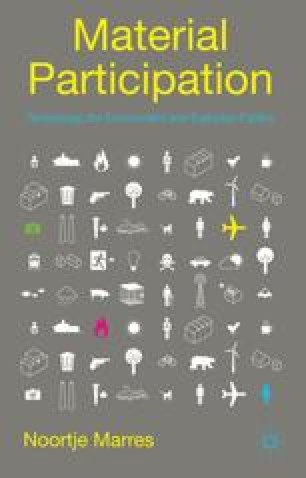 Ecoshowhomes and the Material Politics of Experimental Variation

When, in the late 1980s and early 1990, social and political theorists turned their attention to the issue of non-humans, they focused mainly on the question of whether these beings qualified as actors (Harbers, 2005; Latour, 1992; Callon, 1986b; Cussins, 1996); whether non-human entities deserved more recognition as constituent elements of social and political life was, briefly put, made to hinge on their capacities for action. This approach has been criticized for its latent anthropomorphistic assumptions, that is, for unfairly suggesting that non-humans must be like humans if they are to be accorded political capacities.1 But the device-centred perspective on material participation that I am developing here suggests a somewhat different take on the matter: it proposes that we examine how material entities become invested with specific capacities, like powers of engagement, in particular settings and at certain times. From this vantage point, there is another problem with the debate about non-human agency besides anthropomorphism: it can too easily be mistaken to suggest that the crucial issue is whether non-humans are ‘naturally’ endowed with capacities for socially or politically significant action. This is why I think we need a more radically performative take on the question: instead of seeking to resolve once and for all whether non-humans qualify as participants in social and political life, we must ask how these entities acquire and lose such powers in specific circumstances. In this chapter, I will discuss the implications of such an approach for our approach to material democracy, and argue that it invites an experimental understanding of it.

Political Theory Social Housing Political Life Building Type Political Theorist
These keywords were added by machine and not by the authors. This process is experimental and the keywords may be updated as the learning algorithm improves.
This is a preview of subscription content, log in to check access.