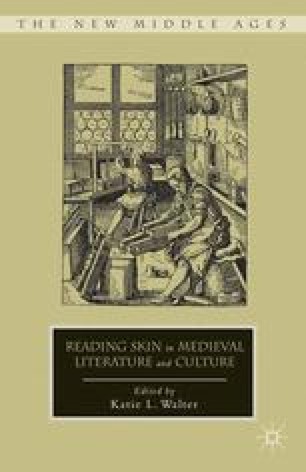 The Form of the Formless: Medieval Taxonomies of Skin, Flesh, and the Human

In recent philosophies of the human, skin has been posited as the “ground of grounds, or the form of forms.”1 Open to the world, the skin is “readable”; it is that which inscribes the interior on the exterior and manifests the self. Didier Anzieu’s influential psychoanalytical theory, for example, understands skin to function as the background or screen against which the self emerges: skin is thus “a basic datum that is of both an organic and an imaginary order, both a system for protecting our individuality and a first instrument and site of interaction with others.”2 Number fifty-four in French philosopher Jean-Luc Nancy’s Fifty-Eight Indices on the Body asserts: “The body, the skin: the rest is anatomical, physiological, and medical literature … But the truth is skin. Truth is in the skin, it makes skin: an authentic extension exposed, entirely turned outside while also enveloping the inside.”3 Coincident with the body, the truth-telling of skin, in Nancy’s terms, makes it the very stuff of discourse. Likewise, Steven Connor in The Book of Skin claims: “The skin is always written: it is legendary.”4

Mass Grave Menstrual Blood Black Skin Medieval Philosophy Medieval Literature
These keywords were added by machine and not by the authors. This process is experimental and the keywords may be updated as the learning algorithm improves.
This is a preview of subscription content, log in to check access.