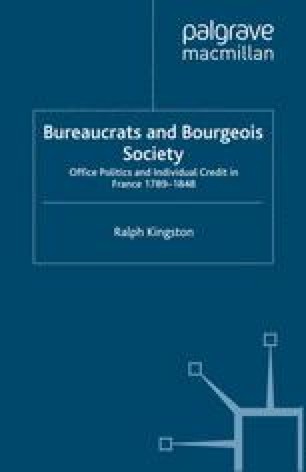 The Anxieties of Administrative ‘Transparency’
Chapter
Part of the War, Culture and Society, 1750–1850 book series (WCS)

After a procession of market women unceremoniously marched the King to the capital on 5 and 6 October 1789, a new chapter began in the history of a political Revolution. No less momentous was that date for a revolution in administrative practice; as Louis relocated his court from Versailles to the Tuileries, his ministers relocated both their residences and their offices to the faubourg Saint-Germain. Montmorin, Minister of Foreign Affairs, leased two buildings for his offices between the rue de Bourbon and the rue de l'Université (near his own mansion on the rue Plumet).1 Uniting these buildings by knocking down a separating wall, some stables and a corps de logis, Montmorin concentrated his administration in a way that had been impossible while his Royal Master resided in the Château de Versailles.2 Almost overnight, the Ministry of Foreign Affairs found itself remade spatially by the events of the French Revolution, its offices united in a single building, and its employés joined – if not by politics – by the common experience of coming to work. By walking through the faubourg to the ministry (and entering by the main gate, not the domestics’ side door), the employé turned from court lackey into civil servant.

Public Sphere Public Safety Foreign Affair Ground Floor Bourgeois Society
These keywords were added by machine and not by the authors. This process is experimental and the keywords may be updated as the learning algorithm improves.
This is a preview of subscription content, log in to check access.