Toward a North American Legal System 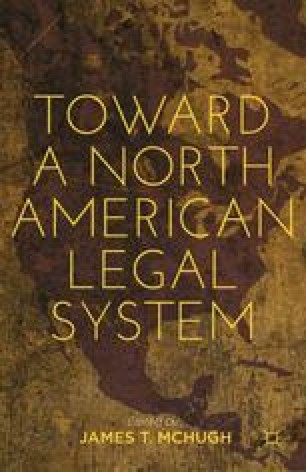 Conclusion: The NAFTA Region—a View from the Current Mexican Agenda

In late 2003, Vicente Fox, president of Mexico (2000–2006), sent to Congress a bill to reform the Federal Criminal Code and the National Health Statute. The objective was to generate the proper incentives for state and municipal authorities to get involved in addressing the problems that drug trafficking and drug consumption generate. Some of the bill’s provisions established that the consumption of certain illegal substances would not be punished so long as the arrested persons were able to prove that they were consumers as opposed to dealers. Two years later, Congress passed the bill.1 The media began covering this issue under the assumption that this reform implied some sort of “soft legalization” of drugs.2 However, in a quite surprising move, once the bill was ready to be enacted, President Fox decided to veto it.3 Many sources attributed this change of course to the pressure that the U.S. government exercised over President Fox’s administration.4

Organize Crime Regional Security Municipal Authority Constitutional Amendment Security Cooperation
These keywords were added by machine and not by the authors. This process is experimental and the keywords may be updated as the learning algorithm improves.
This is a preview of subscription content, log in to check access.