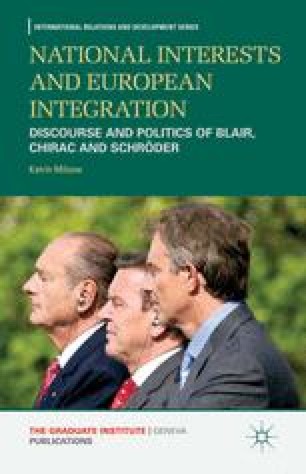 During the 1990s, observers from various backgrounds began to point to a resurgence of ‘national interests’ in the public statements of European political leaders. This resulted in speculation about a possible paradigm shift in attitudes towards the European project and the mechanisms underlying the European Union (EU). In particular, analysts and witnesses of European politics feared the undermining of a culture of consensus1 which had carried the European project throughout the Cold War years.2 Concerns about a ‘Thatcherisation’ of European politics grew as discourses of ‘national interest’ appeared not only in member states known for their caution towards the European Union like Britain, but also in France and Germany where even apparently convinced Europeans such as Joschka Fischer began to draw on the notion of ‘national interest’.3 Especially in Germany, where Helmut Kohl was leaving the Chancellorship after 16 years in office, renewed emphasis on ‘national interests’ combined with the uncertainties of generational transition to amplify concerns about the country’s post-Cold War European and international role.4

European Union Member State National Interest European Council Common Agricultural Policy
These keywords were added by machine and not by the authors. This process is experimental and the keywords may be updated as the learning algorithm improves.
This is a preview of subscription content, log in to check access.