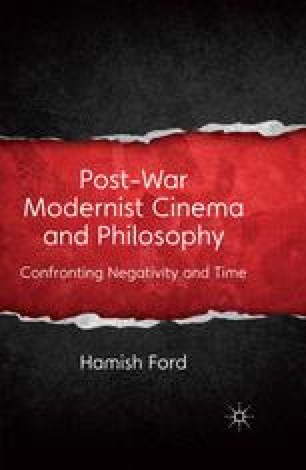 Western discourses of history, politics, philosophy, and film studies have traditionally positioned dangerous negativity and time as outside the subject, thereby enabling the human being’s continuing affirmation and that of its anthropocentric world. This book has suggested that the film medium potentially renders and engages such forces in radical ways as seen in post-war modernist cinema examined through four exemplary feature films. I have argued the necessity of the violence committed by negativity and time charted in the preceding chapters as an imperative to doubt both ontological and post-ontological formulations.

Negative Impression Contemporary History Preceding Chapter Western Discourse Negative Dialectic
These keywords were added by machine and not by the authors. This process is experimental and the keywords may be updated as the learning algorithm improves.
This is a preview of subscription content, log in to check access.