Making Sense of Constitutional Monarchism in Post-Napoleonic France and Germany 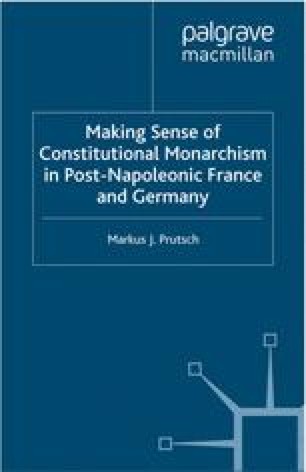 As has been shown in the preceding chapters, both the enactment and the actual practice of monarchical-constitutional systems in France and the Southern German states can only be understood ‘in context’, that is as phenomena depending on and exposed to external frameworks or ‘inputs’. At the same time, the systems themselves had a considerable impact: be it in the shape of active perception, at home and abroad, or in the shape of immediate (political) ‘reactions’. The enactment of constitutions in Bavaria, Baden and Württemberg as secondary or — in the case of Baden — even tertiary powers did not have the same significance for Europe as the setting up of the Charte. In France, the actual establishing of a monarchical-constitutional system, as well as its later breakdown in 1830, was of international dimensions, absorbing the attention of governments and political elites all over Europe. This was particularly the case because the success or failure of the Charte was symbolic of the (in)ability to deal with and overcome the Revolution. In contrast, the constitutionalisation of the Southern German states was more a ‘regional’ than a ‘European’ event, nevertheless with far-reaching consequences for the political and intellectual development of Germany.1 The constitutionalisation of Bavaria, Baden and Württemberg was actually regarded as the dawning of a new era by the progressive forces and for that reason feared by the ruling class in many other German states, above all Austria and Prussia.

Constitutional Theory Parliamentary System Representative Constitution Constitutional System Popular Sovereignty
These keywords were added by machine and not by the authors. This process is experimental and the keywords may be updated as the learning algorithm improves.
This is a preview of subscription content, log in to check access.