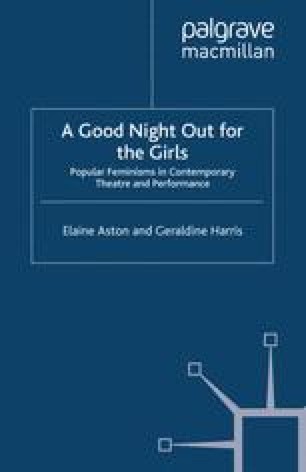 Once More with Feeling: Joanna Murray-Smith’s The Female of the Species and Nic Green’s Trilogy

At first glance Joanna Murray-Smith’s play The Female of the Species (2006) and Nic Green’s devised production Trilogy (2009) appear so dissimilar, that any comparison would be inappropriate. Amongst other things, Female is a mainstream commercial production and Trilogy a work of experimental theatre, albeit as Lyn Gardner underlined an ‘accessible’ one (2010a). Nevertheless, I am discussing them alongside each other because they both constitute relatively rare examples of theatrical productions directly concerned with exploring the ‘legacy’ of second-wave feminism. Equally, both take the figure of Germaine Greer as representative of this movement, although Female does so more exclusively than Trilogy, and the former’s perspective on this past is (apparently) antagonistic, whilst the latter’s is celebratory. This makes Trilogy unusual, in so far that for some considerable time this politics has seemed so unpopular that in a 2004 article on postfeminism and popular culture, Angela McRobbie was prompted to ask ‘why is feminism so hated. Why do young women recoil in horror at the very idea of the feminist?’ (2004: 258).

Popular Culture Feminist Politics Original Emphasis Experimental Theatre Time Page
These keywords were added by machine and not by the authors. This process is experimental and the keywords may be updated as the learning algorithm improves.
This is a preview of subscription content, log in to check access.