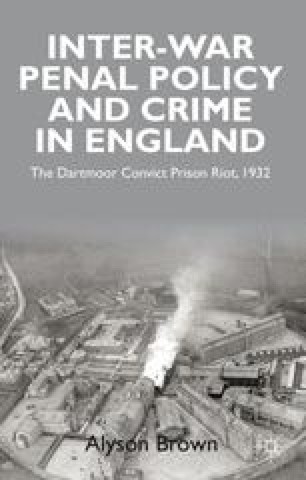 This book examines the causality, process and impact of a major prison riot which occurred in Dartmoor Convict Prison, Devon, on 24 January 1932. This disturbance, in which the prisoners took over control of the prison, albeit for a short period of time, attracted extensive political, media and public attention. The riot was one of the biggest media events of the year, resulting in headlines in all the popular newspapers and newsreels by Pathé News and Movietone being shown across the country. It also tested the strength of the prevailing direction of penal policy and focused political and public attention on the persistent offender. The Du Parcq Inquiry was immediately established in order to examine the causes of the outbreak and its report, after only five days of work, was eagerly awaited by the press. Investigators from the Criminal Investigations Department then began to collect evidence for use in the prosecution of individuals for their role in the rioting, and ultimately charges were brought against 31 Dartmoor inmates. Proceedings were also brought against two convicts for assaults against prison officers in the days before the riot. A total of 99 years was meted out in additional sentences to these 33 Dartmoor defendants; sentences which contemporary officials accepted were exemplary.

Prison System Penal Policy Escape Attempt Persistent Offender Popular Newspaper
These keywords were added by machine and not by the authors. This process is experimental and the keywords may be updated as the learning algorithm improves.
This is a preview of subscription content, log in to check access.