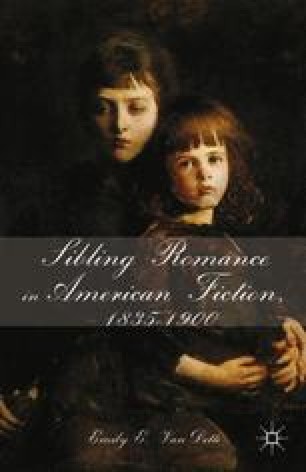 Epilogue: Sibling Romance in/and the Canon; Or, the Ambiguities

The Reconstruction novels of Harper, Chesnutt, and Hopkins expose the limitations of a national affiliation predicated on such constructed and arbitrary factors as race. Throughout their novels, mysterious identities abound, obscuring familial and racial ties. The consequences of that confusion are particularly dramatized in sibling dynamics, which function either to realign power toward the utopian dream of racial solidarity, or to expose the utter instability of race-based hierarchies. When he depicts John Warwick’s taboo gaze at his sister’s maturing physique, a momentary transgression caused by the absence of sibling identification, Chesnutt both draws upon the sibling romance popularized by nineteenth-century domestic fiction and anticipates the literary trope of interracial sibling incest that would develop in later eras of American literature, making The House Behind the Cedars a crucial link between the sentimental tradition of sibling romance and the treatment of sibling incest in modernism and beyond. The roles that gender and genre would play in that lineage are reflected in the mysterious history surrounding the “other” fictional work that Margaret Mitchell would attempt to publish in 1936. Following a brief discussion of the intriguing story of Mitchell’s lost novella, I close with a brief consideration of how the sibling romance tradition in antebellum and postbellum US literature, which this book has explored through the mostly noncanonical founders of that tradition, impacts our understanding of such celebrated authors as Faulkner, Hawthorne, Melville, and Poe.

Literary History Sibling Incest Utopian Dream Literary Trope Literary Marketplace
These keywords were added by machine and not by the authors. This process is experimental and the keywords may be updated as the learning algorithm improves.

He who is sisterless, is as a bachelor before his time. For much that goes to make up the deliciousness of a wife, already lies in the sister.

—Herman Melville, Pierre; Or, the Ambiguities1

Perhaps an even more relevant Mitchell “text” might be her early effort, now destroyed, called “ ‘Ropa Carmagin.” In it, a young white aristocrat called “Europa,” living in a crumbling plantation house, falls in love with a mulatto man who is probably her half-brother. It was as if Mitchell had started to write Absalom, Absalom! in 1927 and was stopped by her husband’s dislike of the story. Gone with the Wind seems altogether tamer. Still, it was inevitable that someone tell that southern story about the black brother and white sister who wanted to become lovers: it was the unarticulated nightmare of the South.