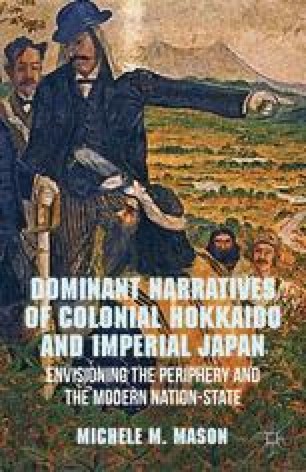 A Pantheon of Promises

The Making of Fantasies of Freedom and Capitalist Dreams
Chapter

Although Hokkaido had long been envisaged as a space of exile and emptiness, in the post-restoration period visions of opportunity and prosperity vied for a competitive edge over such notions. In the Meiji market of Hokkaido fantasies, government officials, corporate interests, and fiction writers plugged financial security, personal freedom, and utopian escape. State agencies promoted the bountifulness of vast tracts of untouched virgin land in the north waiting for the guiding hand of spirited Japanese settlers and enterprising capitalists. Starting in the 1880s, private businesses, such as the Revitalization Company (Kōfukusha), the Progress Company (Kaishinsha), the Shining North Company (Hokkōsha), and the Sincerity Company (Sekishinsha) planted sunny pictures of second-chances and self-sufficiency in Hokkaido as they plied their services to navigate mainlanders through the relocation process. Along with their inspiring names, these immigration enterprises disseminated promotional materials that affirmed the successful transfer of Japan’s advanced technology and institutions to Hokkaido while peddling the tantalizing prospect of owning land in the pioneer territory. Authors, for their part, figured Hokkaido as a haven where individuals could reinvent themselves, escape prejudice, or shake off the constraining demands of either tradition or modernity. These modern fantasies all, in one fashion or another, touted liberatory, fresh starts.

Coal Mining Short Story Communal Farm Personal Freedom Tenancy System
These keywords were added by machine and not by the authors. This process is experimental and the keywords may be updated as the learning algorithm improves.

Ever since my schooldays, I thrilled to my heart just to hear the name of Hokkaido … I was resolved to leave this defiled part of the country and take my chance in the free lands of Hokkaido.

Hokkaido is the coffer of the nation.