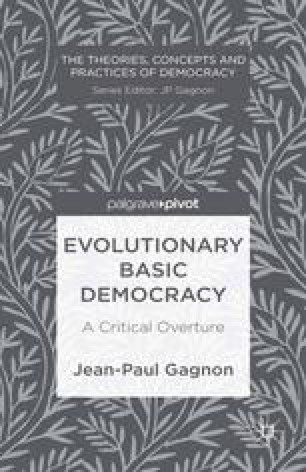 The Subalterns and Unknowns of Democracy

Two bodies of literature on democracy are described in this chapter. The first concerns anthropocentric works that claim wider and different origins for democracy. The history of democracy is more complex than we currently think it is. The second body of literature described concerns nonhuman democracy. The chapter offers a table that surveys mammals, birds, fish, insects, slime-moulds and bacteria. Biologists argue that these different species have specific democratic practices. The chapter describes that physicists and mathematicians use the terms ‘democracy’ and ‘democratic’ in their works. It asks whether democracy or democratic things had a role to play in the origins of life.

Democratic Theory Inanimate Matter City Gate Arabic Scholar Royal Power
These keywords were added by machine and not by the authors. This process is experimental and the keywords may be updated as the learning algorithm improves.
Download to read the full chapter text